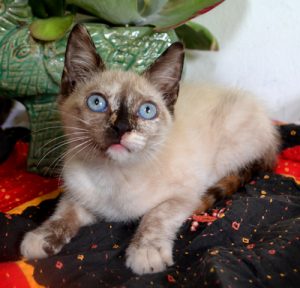 As soon as he matures, shortly after the age of six months, a young tomcat will go out seeking females with which to mate.  As other tomcats in the district will have exactly the same idea there will be fights.

Unfortunately, the bites and scratches that even the most successful tomcat receives often become infected and abscesses form. Flies that land on any open wounds will lay eggs, then maggots develop.  This results in pain, suffering and trips to the veterinarian for the young tomcat.

All this can be avoided if the tomcat is neutered.

Neutering can be carried out while he is still a juvenile (under six months old) or can be done as soon as he reaches six months.  Consult your veterinarian and find out which he prefers.

After neutering the cat will spend more time at home.  He will not become involved in vicious mating fights. He is also unlikely to mark his territory by spraying inside the house. Neutering also protects him from

There is a chance that he may put on weight as his focus changes from sex to food, but he can get his exercise hunting or playing with his toys.

Of course, there may still be the occasional fight, but these fights will be less destructive as the cat will be defending its territory rather than establishing its “rights” to a female.

Neutering can be done at any time in a tomcat’s life, but doing it while he is young will save him a lot of pain and misery.