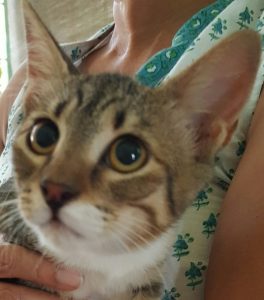 Cats often suffer from a lack of understanding. This has frquently led to the persecution of these beautiful animals.

Sometimes, people cannot explain why they do not like cats but often, this dislike is based on what is sometimes a very vague memory of hearing that cats are somehow connected with evil spirits, the devil and the underworld in general. This, of course, is simply ignorance and superstition but, unfortunately, it still flourishes.

A prime example of this was reported in the newspapers some years ago, when villagers in central Trinidad were protesting against the establishment of a funeral home in their area. One man claimed he had seen a white cat on the wall of the property to be used for the funeral home.  He said, “One minute it was there and then it just vanished.”  He thought that it was a “spirit cat” and so a good reason not to let the funeral home open up there!

Anyone who does own a cat would have realised at once that that is just the normal way that cats appear and disappear.  They move silently, jumping up onto walls and then slipping off again – like jelly sliding out of a bowl.

People need to understand that :

It is time to start appreciating cats!